What do Canadians Really Think About Climate Change?

In this new report, we dive into the most recent public opinion research on climate change in Canada. We reviewed publicly available survey and focus group results from 2019 through January 2021 (and cross-checked them with subscriber-only research). We’ve dug underneath the headline numbers, stress-tested rosy results and identified attitudes that advance or undermine a social mandate for climate action.

We found lots of good news:

Canadians increasingly understand that climate change is a “here and now” problem, not just something that will have  impacts in the future. There’s been a double digit increase in this attitude since 2014 which is important because “proximity” is one of the keys to unlock engagement.

But those high levels of concern don’t automatically translate into a social mandate for more aggressive action.

There’s a core group (about 25% of the public) that are truly “Alarmed” and then a much larger group (about 45% of Canadians) that are “Concerned” but not very engaged. 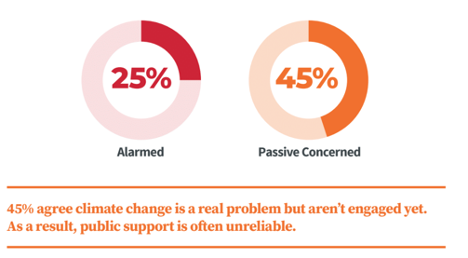 This large moveable middle means that demand for action is much lower than concern. And it means public support isn’t reliable when difficult, real world decisions come around. Most people can’t name a climate policy without prompting. They’re not thinking about gas furnaces or even gasoline cars. When they think about actions to address climate change, they’re thinking about recycling, drinking water, and maybe plastic straws or tree-planting.

Big differences between audiences
There’s a big divide between political identities which drives a lot of the polarization around climate and energy issues. Just 31% of Conservative party supporters say climate change is “extremely” or “very” serious compared to over 60% for Liberal, NDP or Green supporters.

There are also important differences in demographics. Younger generations are much more worried than older ones. Canadian women are much more attuned to the climate crisis than men.

Canadians are more satisfied with what the government is doing on climate than advocates might expect given the high levels of concern. Most Canadians look to the federal government for leadership on climate and polling results range between 42% to 57% saying the government isn’t doing enough to spur a clean economy or fight climate change. In one poll following the news coverage about the Liberal government’s proposals for an enhanced climate plan, 71% of respondents graded federal action as “good” or “acceptable.”

Canada in the world

Canadians really want to play a global leadership role on climate. And they think we already are. At least two-thirds of us want Canada to be “world leading” or at least “among the most ambitious” countries.

You find several obstacles to engagement embedded in Canadian opinion. Public understanding of the solutions and pathways to energy transition is a big one. It’s a clear priority for communicators to paint people a picture of what solutions look like in tangible terms.

In the report we also look at “efficacy” — how confident are people that climate change can be addressed.

Quebecers are more optimistic than the Rest of Canada. But it’s pretty striking that almost 60% of people outside Quebec don’t really believe governments will be able to reduce carbon emissions much, even if they try.

We hope you’ll download the full report where you can dig into where Canadians stand on COVID recovery issues, attitudes towards the Biden administration, carbon pricing, fossil fuel production and much more.