The Tar Sands Blockade — a coalition of environmentalists, ranchers, landowners, indigenous communities, rural hunter and anglers, and students in Texas and Oklahoma — is committed to employing nonviolent direct action strategies to halt the southern segment of the tar sands pipeline. The campaign aims to raise public awareness of the environmental and health impacts that TransCanada's pipeline will have on working class communities in Texas. Using the famous phrase “Don’t Mess with Texas!," the coalition is organizing individuals who are ready to risk arrest in an effort to "break Big Oil's grip" on the region.

On August 16, 2012, the campaign staged a day of action across Texas and Oklahoma to expose TransCanada’s "quiet start" to contruction on the southern section of the Keystone XL pipeline. On of the morning of the action, organizers unfurled a banner in front of TransCanada's bulldozers to resist the industry’s "toxic land grab" and received support from author Bill McKibben. Members of the coalition spread word about the campaign through social media in advance of the event to gather individuals who believe that while contruction may have started, the people of Texas "will not allow it to be finished." The Tar Sands Blockage plans to continue their actions throughout the state this summer. 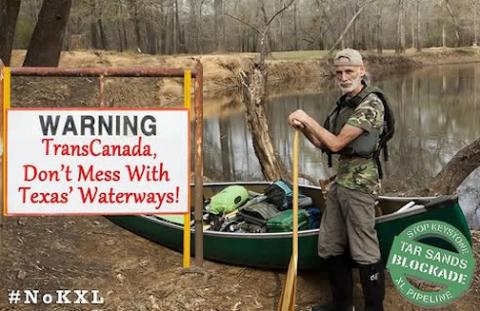