A new series from the PBS NewsHour is sharing stories about climate impacts across the United States.

The PBS NewsHour launched a year long "Coping with Climate Change" series, which consists of a section of the PBS website and a televised segment dedicated to videos, interactive maps, blog posts, and photo slideshows exploring how communities in the United States are tackling the effects of rising global temperatures. A current theme of the initiative is the impact of the severe drought that hit Texes in the summer of 2011. The site focuses on the challenges that local residents have encountered, including heat waves, diminished groundwater and wildfires, and highlights stories of the communities' efforts to implement adaptation plans.

In an effort to communicate about the issue of climate impacts and responses through a variety of multimedia options, Coping with Climate Change includes videos and slide shows of photos and satellite images. They're also asking members of the public to submit their own personal climate change stories (i.e. observations of changes in plants, wildlife, weather patterns etc.) and encouraging individuals to share how these changes are affecting their lives.

Learn more about the series. 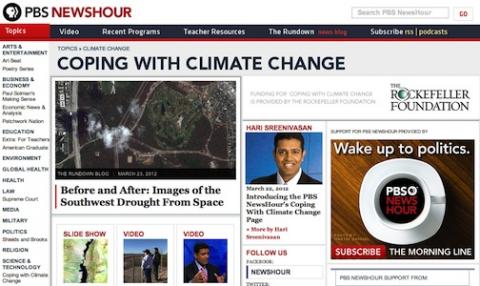