Update: May 2012 — The iMatter campaign takes its case to the courtroom to argue for better protection of our atmosphere for future generations and tells its story of youth engagement through video.

The iMatter Campaign is organizing young people to pursue litigation that would require the government to respond to climate change. The lawsuits are part of the Atmospheric Trust Litigation and assert that the government is legally obligated to protect natural resources for future generations. John Thiebes, a student at Montana State University who grew up on a family farm, is an example of one of the campaign's plaintiffs, who brought the case to the Montana Supreme Court to argue that the atmosphere is part of the public trust that needs to be protected. While Thiebes' lawsuit and those in other states have so far been dismissed, the young plaintiffs are appealing the decisions. The campaign's federal lawsuit to establish a climate recovery plan will be heard on May 11th, 2012. To communicate their vision, iMatter partnered with WITNESS, a nonprofit video production organization, to tell the stories of young people like John from across the country who are concerned about climate change and working toward solutions.
October 2011 — Youth mobilizing one another to organize and be heard on climate change.
Spurred by a simple video created by a teenager, Alec Loorz, this initiative has grown into a global campaign that has reached across political, ideological and ethnic borders, to empower youth to organize and speak up about climate change. Despite being the generation that will suffer most from climate change, youth are also those who will bring about the necessary changes to overcome the climate challenge. 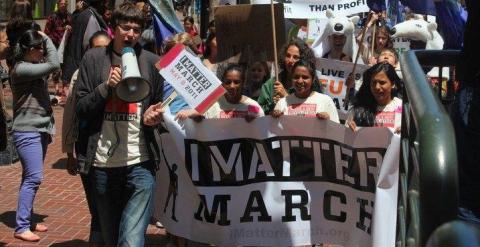