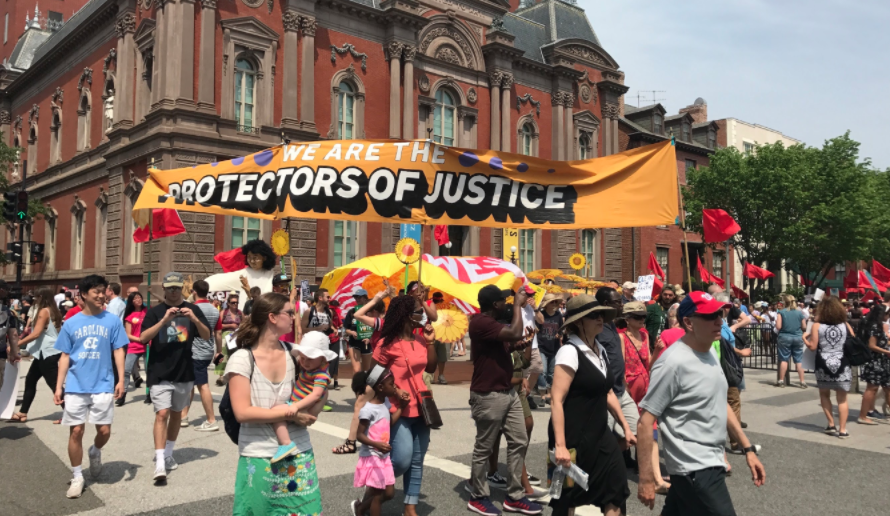 For my nearly two year old daughter, spotting the Lorax on a sign heading down Pennsylvania Avenue was the highlight of the People’s Climate March. Dr. Seuss’ indelible reminder stuck with me as we joined the huge crowd of demonstrators in front of the White House last Saturday; “Unless someone like you cares a whole awful lot, nothing is going to get better. It's not.” And there’s a lot to care about these days.

Despite the broiling heat wave that swept through the Washington area, the mood of the march was spirited with a powerful sense of community and shared intention to resist the Trump administration’s attempts to rollback climate policies and environmental protections. Coinciding with Trump’s 100th day in office, concerned citizens chanted “shame, shame” outside the residence of the President, calling for climate solutions and an end to fossil fuels. As one of the most prominent voices of the march, representatives of frontline communities demanded justice for those most affected by climate change. Students from the Historically Black Colleges and Universities (HBCU) Climate Consortium expressed concern about people being displaced by climate change and negative health impacts from polluting industries. “Water is life” was another prevalent message as indigenous people and allies called attention to the continued resistance against the Dakota Access Pipeline. When talking with marchers about why they were taking to the street, there was a noticeable recognition of how climate change is affecting us here and now. Individuals expressed concern about future generations, but also shared how climate change was already impacting their health, their jobs, and their communities. Banners declaring “climate change is here, and it's real”, "clean this place, don't displace," and “the oceans are rising and so are we” positioned the issue not as a distant issue, but a pressing problem that requires our full attention.

The power of the People’s Climate March is in showing decision-makers that their constituents are deeply troubled by efforts to dismantle climate progress, to energize the movement, and to ultimately influence electoral outcomes. The next step for those who braved the heat on April 29 is to stay involved in their local communities to support climate action and low-carbon solutions. The Lorax will be proud.

Now what? Tips for maintaining momentum:

The March for Science and the People’s Climate March played an important role in keeping the public’s desire for climate action alive in the news cycle during efforts to roll back progress. What’s required now is to turn the energy and momentum exhibited at both marches into electoral influence.

The messaging for both marches transcended policy details to focus on a call for action based on values. Participants in the March for Science expressed how science saves lives, protects our food and our health. The People’s Climate March showed how ordinary people are standing up to injustice, from neighborhoods impacted by climate change and polluting industries, and demanding equitable solutions. Across both marches there was room for individual concerns, but the power of the demonstrations was in the larger story around shared values. It’s these values that climate leaders should continue to amplify moving forward.