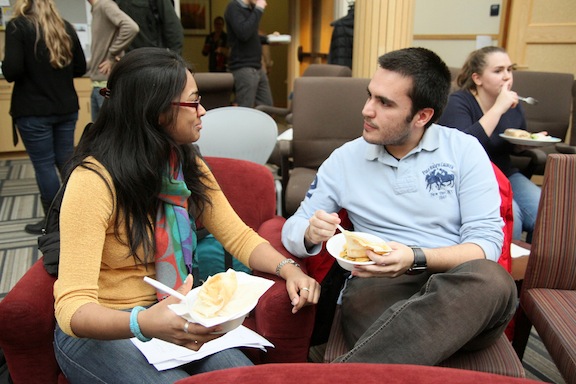 Most of us who are concerned about climate change wish there were more people who share our concern and will try to do something about it.  Each of us can influence other individuals to join us by using some simple techniques that will help you to:

These recommendations are based on proven techniques in social psychology. I have taught these techniques to social and political activists for nearly a decade through experiential workshops. Tomorrow’s Climate Access/Climate Nexus roundtable on “Readying the Ground: Starting Climate Conversations in Difficult Places” spurred me to share the techniques for talking about climate change that I use in workshops, primarily with individuals, in ways that will move them toward action.

It may surprise you, but in conversation, it's often best not to lead with climate change, per se, unless the topic has already come up.  Instead, lead with exploratory comments or questions.  Eventually, you’ll be able to find out where the individual is in terms of their readiness to accept climate change as a man-made reality and DO something about it, by either changing their own behavior in some way and/or becoming an activist. But at the outset, and all along the way, how you interact with the "target" person should be customized to where that individual is in terms of their readiness to change.

The latest, April 2013, round of the Six Americas research has shown that surprisingly high numbers of people in almost all of the six groups express some readiness to change their own behavior in ways that would help our climate situation.  Getting a person to take action—some action—can be even more important than trying to get them to agree explicitly that climate change is real and is man-made.  Once one's behavior has changed in some relevant way (for example, using CFLs, buying an energy-efficient car, or telling one’s legislator that our government should stop giving tax breaks to oil companies), that person is potentially more receptive to thinking about how their action also happens to be positive with regard to climate change.

What will it take for a person to become involved with climate issues?

Change is a process – it takes time

People go through similar predictable stages as their political views change or as they move toward becoming climate activists. How you interact with the person should be tailored to where they are in this change process.  If what you do or say is out-of-sync with what’s going on inside of them, you’ll not only be ineffective but may even cause them to back away from the desired change.

It generally takes at least two years for a person to go through the whole transition, if it’s to happen. Given the urgency of the climate crisis, it makes sense not to waste time on outright deniers.  With other people who are more reasonable prospects, however, your understanding of the stages of change can greatly improve your chances of bringing them over to your point of view.

Backsliding occasionally happens, but that’s to be expected—the person who used to be concerned about climate change but now is dubious may be able to progress past that phase to positive conviction the next time they try.

To read the rest of the tips and techniques, download the full report here (member login required)

Dr. Katherine Forrest, a public health physician, has extensive experience as a trainer and as a trainer of trainers, based on her work at Harvard School of Public Health, Yale University, University of Connecticut, Planned Parenthood, and the Commonweal Institute.