Generation Yes - from whitepapers to conversations 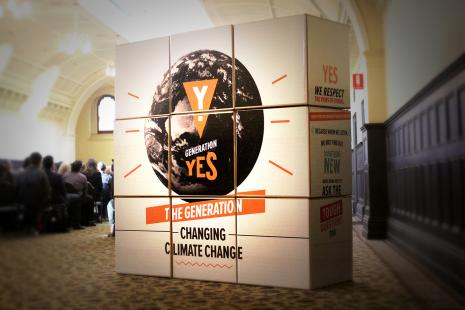 Climate Works Australia is an NGO that generally produces research and reports modeling the implementation of low carbon pathways and how Australia can be successful in the post-carbon economy. However, after a meeting with UNFCCC Executive Secretary Christiana Figueres they realized there needs to be a wider conversation about a post-carbon world within communities and business audiences as well as among policy wonks and academics.

Their answer to this thorny question has been to develop an Australia-wide campaign called Generation Yes, which aims to start a national conversation about how Australia can achieve net zero emissions by 2050. Climate Access’ Amy Huva spoke with ClimateWorks’ Adam Majcher to delve deeper into their engagement and outreach strategy.

The first thing ClimateWorks had to do was find a broad enough frame within which to tie together all the different strategies and interests that are encompassed in climate action; health, jobs, climate justice, a 2oC target, wildlife, pollution free campaigning etc. Using the ideas from the Common Cause 2012 report on communicating bigger than self problems social media testing and focus groups showed that frames anchored in self-direction (independence, freedom etc.) were a good antidote to the climate ‘debate’ taking place in public discourse. By tapping into a better sense of self that could re-engage people who might be turned off by politics, they came up with Generation Yes to promote a ‘can-do attitude’ that fits within the Australian mythology that ‘when the chips are down, we are a nation that is good a banding together and inventing our way out of a mess.'

The project is now aiming to ‘socialize’ the idea that net zero is not only achievable for Australia, but a good idea through spokespeople, groups and organizations that ClimateWorks is assisting in reaching their audiences with the message of net zero. The groups they’re working with fall into four categories; community groups, business groups, subnational groups (Cities, Councils, States), and individuals.

ClimateWorks found the solutions story is still relatively new and somewhat unsophisticated in the Australian national narrative, so they want to help demonstrate broader support from a wide range of organizations through building capacity and building a community of interested people who can move debates beyond the science and towards action.
The Generation Yes campaign has a four-step plan for decarbonization that includes: ClimateWorks’ Adam Majcher said that they went for ‘net zero’ rather than ‘100% renewable’ or ‘carbon neutral’ because it was seen as an absolute goal that people could wrap their heads around – a larger goal to aspire towards. He also liked that unlike focusing just on getting to 100% renewables (an excellent goal on its own), aiming for net zero emissions also included things like energy efficiency and storing emissions from agriculture.

The Generation Yes website outlines the steps for decarbonization as well providing examples of where the transition is already occurring and laying out the fine detail of the goal in their Pathways to Deep Decarbonisation: Technical Report. ClimateWorks hopes that by providing their partner groups with a range of materials (blog posts, presentations, social media shareables) the solutions pathways conversation can start rippling out into many different sectors, paving the way for the conversation to be about what to do to fight climate change, not whether to do it.