Finding the Political Will to Phase Out Fossil Fuels As someone immersed in climate issues every day, I feel the IPCC’s window for action ticking away and the urgent need to make transformative shifts to our energy infrastructure. The science is clear, the end of the fossil fuel era is imperative to protect ourselves - and frontline communities in particular - from catastrophic climate impacts. Public opinion research shows that a little over half of Americans and Canadians want to move away from fossil fuels. What’s keeping these poll numbers from growing? The obstacle to strengthening support for a just transition is a familiar story when it comes to responding to climate change...party affiliation. With climate change gaining the ignominious distinction of being the most politically polarizing issue in the U.S., it’s not surprising that efforts to get at the root of the crisis are just as fraught.

When asked what energy sources people want to see developed, solar and wind are consistently popular across party lines. Despite uncertainty that moving away from oil, gas, and coal is fully feasible, there is majority support for the idea. 60% of Americans say they favor proposals to dramatically reduce the use of fossil fuels as a way to address climate change. Over the last five years, support for increased oil and coal production has been falling, yet political divisions are still prevalent as Republicans express much stronger levels of opposition to a phase out than Democrats and Independents. 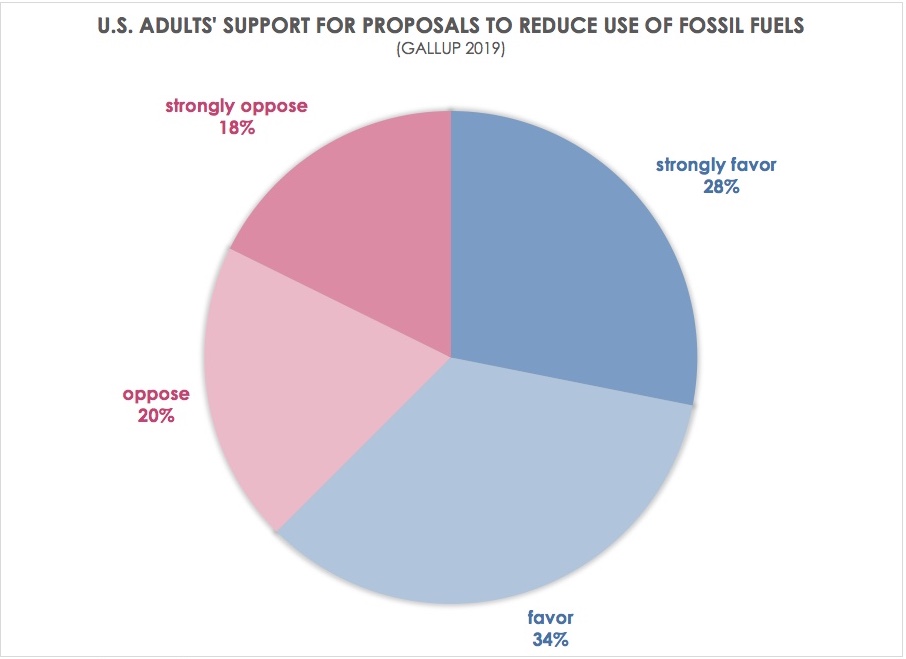 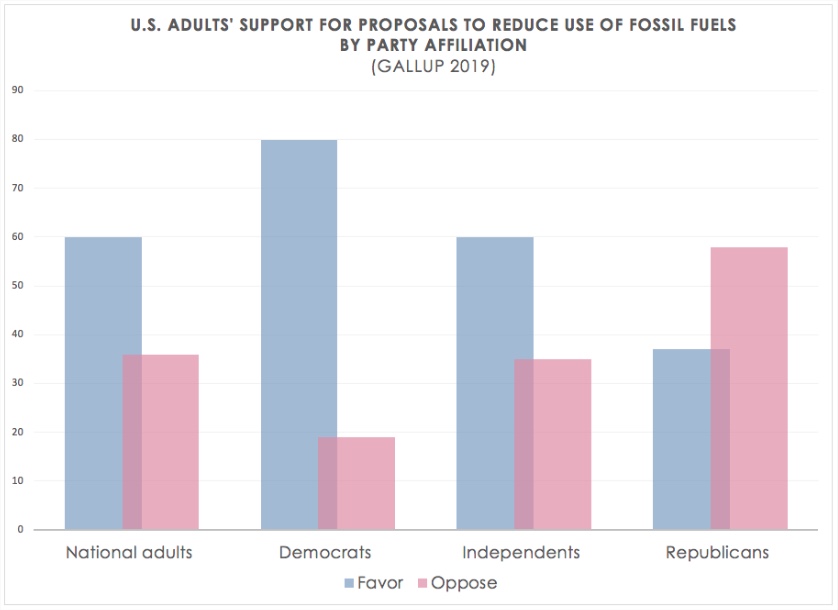 The Global Climate Strike in September demonstrated the depth of concern that young people are feeling about the climate crisis and the need to phase out fossil fuel development. Polling shows that Millennials are highly supportive of “keep it in the ground” policies, yet majorities of older generations are on board as well. When U.S. voters were presented with the choice to support or oppose policies designed to prevent pollution and climate change by prohibiting new fossil fuel plants and pipelines when there are renewable alternatives available, 66% of Millennials were in support, along with 52% of Generation X, 51% of Baby Boomers, and 51% of the Silent Generation. However, political polarization is apparent here as well, with Republicans largely opposing “keep it in the ground” policies. When asked to rate initiatives as part of an overall climate plan, 61% of Millennials said that restricting the supply of fossil fuel is essential or would help, as well as 82% of Democrats and just 18% of Republicans. 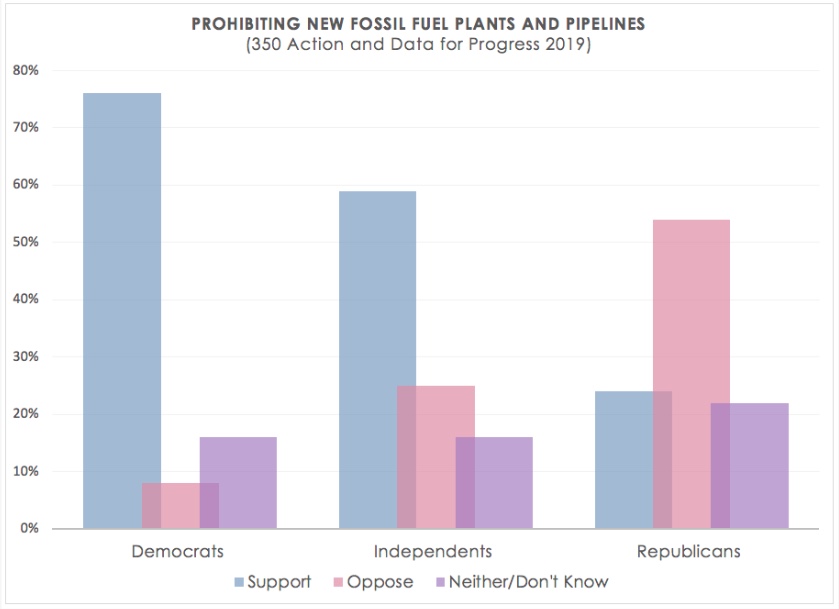 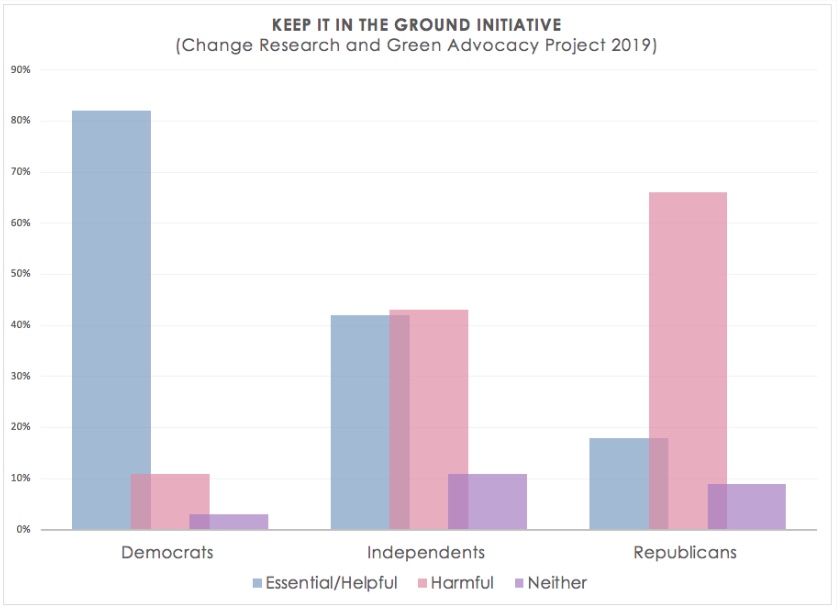 In Canada, three-quarters of the public wants to ensure a transition that isn’t too costly or will displace jobs, even if this means it ultimately ends up taking longer to reduce emissions. 63% of Canadians believe phasing out the extraction and export of fossil fuels over the next 20 to 30 years is achievable. These attitudes hinge on political affiliation and, significantly, regional identity as well. Whereas large majorities in much of the country say it’s necessary to reduce fossil fuel use either a lot or almost completely, less than half of Albertans agree. Earlier this week, incumbent Prime Minister Justin Trudeau was re-elected with a Liberal minority government and a mandate to work with other parties on climate change. Alberta and Saskatchewan (Canada’s largest oil-producing provinces) didn’t elect a single Liberal candidate in part due to widespread opposition to carbon pricing. Albertans and older Canadians are also more likely to disagree that the climate emergency requires the government to adopt a wartime-scale response to retool the economy and transition off fossil fuels. 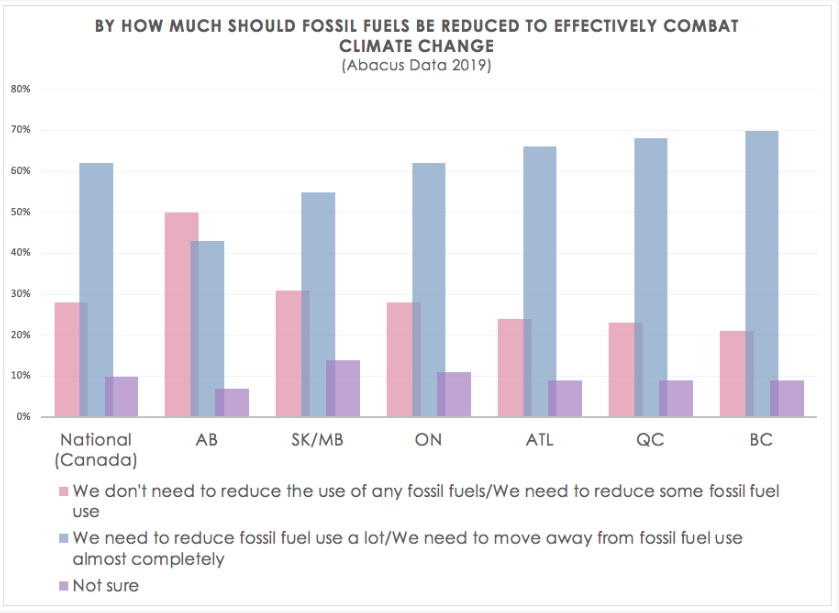 As a whole, Canadians and Americans share similar levels of support for halting fossil fuel extraction, with approximately half the public in each country saying digging for and burning coal, and oil and gas drilling should be stopped. When it comes to forecasting the economic impacts of this shift, 71% of Canadians say a transition from fossil fuels will lead to a more successful Canadian economy in the future. 73% also support the growth of clean energy technologies and believe the renewable sector can create as many new jobs as would be lost in phase out of oil and gas. 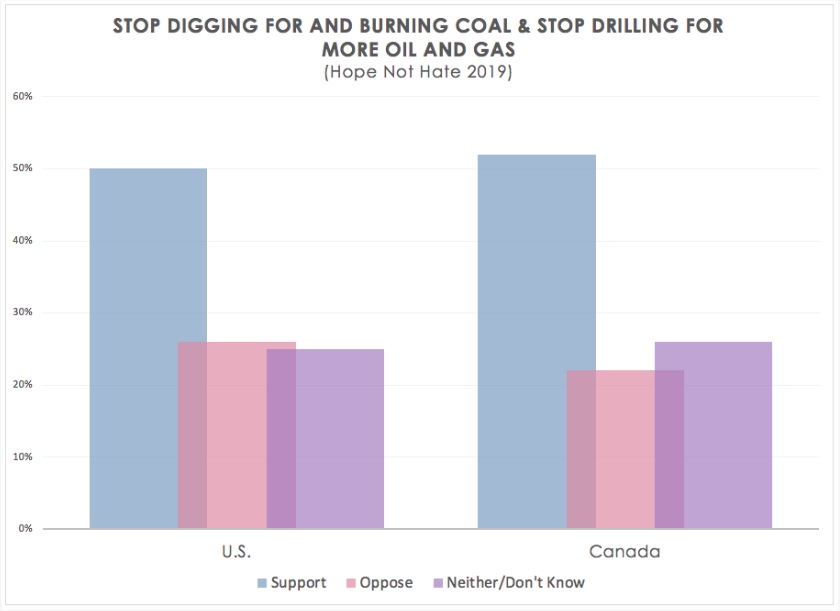 While it makes intuitive sense that solar and wind are appealing solutions that transcend party affiliation, transitioning away from the familiarity of oil and gas can sound overwhelming and genuinely requires monumental shifts across sectors. On top of the inherent challenges, oil and gas companies are producing PR campaigns to greenwash their reputations and promote continued fossil fuel extraction. The encouraging news is increased investments in clean energy technology are making alternatives more cost-efficient and leading to a rapid rise in renewables. Combined with these market forces are the voices of young people saying “no” to fossil fuels and reminding us that the clock is ticking.