Directed-network campaigning: A tried and tested recipe for breakthrough advocacy in the 21st century` 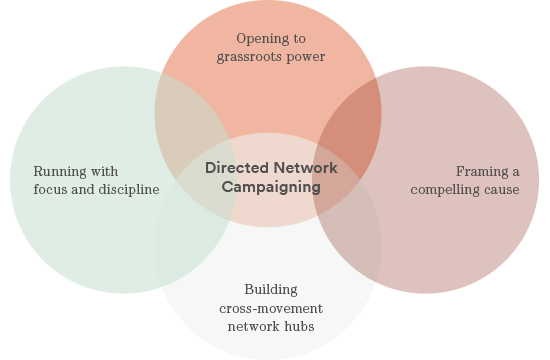 The Networked Change Report, which maps the patterns behind today's most successful advocacy campaigns, reveals a combination of strategies and tactics that will help climate campaigners optimize their approaches for maximum impact and scalability.

Jason Mogus and Tom Liacas at Netchange Consulting recently spent several months compiling data on the common strategic elements behind 47 major advocacy campaigns, mostly launched from North America, that successfully won changes to corporate and public policy, or created widespread attitude change. In their study, they put special emphasis on groups that started with relatively few resources and went on to achieve substantial victories – a capacity they call force amplification in this report.

The winning campaign pattern that comes out of the research is one that effectively marries grassroots organizing and network-building with central strategic goal-setting and cause framing. Called directed-network campaigning, it is a model common to all of today's most talked-about campaigns including BlackLivesMatter, the Bernie Sanders electoral race, Fightfor15 and various fronts of the fight against climate change including the network effort that blocked the KeystoneXL pipeline.

Mogus and Liacas break down the elements of directed-network campaigning into four principles, which group together the different ways that campaigns are deploying these strategies in the field.

Principles three and four, Frame a compelling cause and Run with focus and discipline pertain more to the framing, management and proper execution of campaigns – typically areas that rely on the oversight of a central leadership body.

Understanding and implementing approaches from each of the four principles will allow organizers to set up and run directed-network campaigns and in this way apply a model that is consistently achieving high impact and force amplification in today’s challenging advocacy landscape.

The complete report is available as a free download here

For busy folks seeking the TL/DR synthesis, here is a summary just published in SSIR.