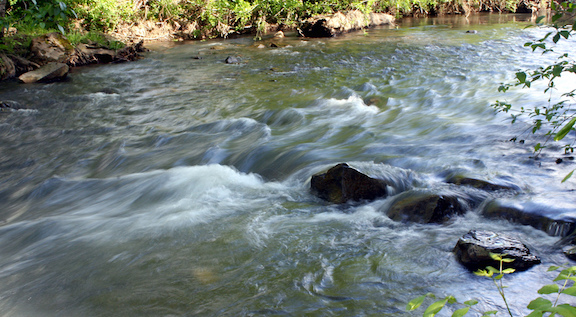 We live in challenging times. The shocks and stresses of global warming affect every community in one form or another. Rising seas and storm surges swamp coastal communities. Floods and droughts of biblical proportions are visited on city dwellers and farmers alike. Forest fires and landslides follow in the wake of dying trees and barren hillsides. Unfamiliar viruses travel northward with pests whose ranges expand with warmer temperatures.

To survive and thrive in the face of these complex and multiplying challenges, we need to build the capacity to work together within our communities and across watersheds. And we need to work with nature and natural processes, rather than fruitlessly trying to control nature and bend it to our will.

These two elements, the capacity to work together and the capacity to work with nature, are key to climate resilience. Trust, collaboration, and developing shared values and norms create social capital that can be invested in strategies and solutions to climate challenges. Natural capital, in the form of ecosystem services and blue-green infrastructure, is more flexible, adaptable and cost-effective than inflexible, single-purpose engineering solutions.

Natural and social capital are in short supply because they have been undervalued, especially when compared to other forms of capital, and eroded by unsustainable and inequitable choices and behaviors. A community’s ability to avoid or recover from climate disasters depends on having adequate supplies of both. The story of Johnson Creek, in Portland, Oregon, is a case in point.

In his classic book, Bowling Alone: The Collapse and Revival of American Community,1 Robert Putnam documents the decline of social capital in America over the past fifty years. In a subsequent search for places where trust and a spirit of cooperation were increasing community resilience and wellbeing, Putnam pointed to Portland, Oregon, and specifically, a place called Johnson Creek.2 Decades of devastating flooding had made the creek a recurring nightmare for residents. Nevertheless, nearly fifty government-generated flood control plans over a fifty year period were rejected by those living along the creek.

In the 1990s, the top-down approach was finally replaced with a process that engaged people from throughout the 54-square mile watershed, bringing together the interests of farmers, suburban communities, and high, medium and low-come urban neighborhoods. The result was an action plan, thousands of engaged volunteers and, most importantly, a supporting organization to sustain community cooperation over time, the Johnson Creek Watershed Council.  Twenty years later, the creek has been transformed from a problem to an asset, natural approaches to flood protection are being implemented successfully, water quality is improving and salmon habitat is being restored in Johnson Creek and its tributaries. By working together, the people of the Johnson Creek watershed have added substantially to the social and natural capital that they will need to face greater climate extremes and resource limitations in the coming years.

Climate resilience is a vitally important issue for all of us. Every community in America has water resources such as rivers, wetlands, watersheds and aquifers that can deliver harm or offer protection from climate events such as floods and droughts. The economic cost of climate disasters is quickly becoming a major public and private expense. Growing demands on finite resources are outstripping the planet’s ability to provide for the needs of people and nature.  Even in wealthy countries like the United States, aging infrastructure, inequitable economic opportunities and environmental injustices undermine progress at every turn, as we have seen most recently and tragically in Flint, Michigan.

According to River Network, one of the fastest growing conservation movements in the United States, with more than 2,000 non-profit organizations nationwide, has freshwater protection as its primary mission. I believe that local, state and regional river and watershed groups, like the Johnson Creek Watershed Council, can play a key role in helping the communities they serve build resilience against future climate catastrophes.

These organizations are well-versed in how the current condition of America’s water resources, ravaged by pollution, overuse, and ill-considered efforts to control waterways through dams, levees and channelization, undermines community well-being. They understand that healthy water resources are priceless natural capital. And, they know a lot about how to protect, restore, and even replicate the role of naturally functioning water resources to build climate resilience. They have been restoring and protecting rivers and watersheds and conserving freshwater resources for decades, long before public awareness of climate impacts raised the stakes of having reliable water supplies, valuable ecological services and blue-green infrastructure.

Local and regional freshwater conservation efforts are also a widespread and effective means of building social capital. America’s rivers and watersheds provide benefits that are broadly valued by people from all walks of life, including water supply and outdoor recreation. And, rivers can be restored by local citizens working together, creating a tangible measure of collective accomplishment and, in the process, building trust, collaboration, and shared values.

Especially, when river groups work hand-in-hand with the leaders of disadvantaged communities to protect and restore water resources, they can make a big difference. These communities may not have the same access to financial or physical capital that wealthier places do, but they often have equal (and perhaps more) capacity for increasing stocks of social and natural capital. And, these communities are in greatest need of climate resilience. They are least able to prepare for or avoid climate impacts. They are least able to get out of the way of a climate catastrophe. And, they walk the hardest and longest path to recovery.

Why should conservation organizations and agencies prioritize the cultivation of social capital in the process of restoring freshwater assets? Arguably, forging ahead with water-related projects that are planned, designed, and implemented by government agencies allied with narrowly focused environmental organizations can be faster and easier.

But, not necessarily more effective at increasing resilience, equity or sustainability. Instead, by emphasizing social capital creation across and among diverse communities, the local knowledge and support that are gained will lead to better and more lasting solutions to pressing freshwater challenges.

Further, communities that are more resilient to climate challenges will make better long-term stewards of their freshwater resources. And ultimately, the transformational path to embracing a new way of living with water, rather than damming, draining, diverting, or piping water -- begins with experiencing the human and natural benefits that arise from collaboratively restoring a river.

The river and watershed conservation movement is in a strong position to lead or support local efforts to build natural and social capital so that American communities can survive climate impacts, get on the path to a sustainable future, and create a water ethic for 21st century. Just as Aldo Leopold’s land ethic transformed society’s view of what is right or wrong in our treatment of non-human members of the community of life, we are now challenged to consider what is right (or wrong) in our relationship with water, the source of all life.

Rebecca Wodder was President and CEO of American Rivers for 16 years and currently serves as Vice Chair of the Board of Directors of River Network.