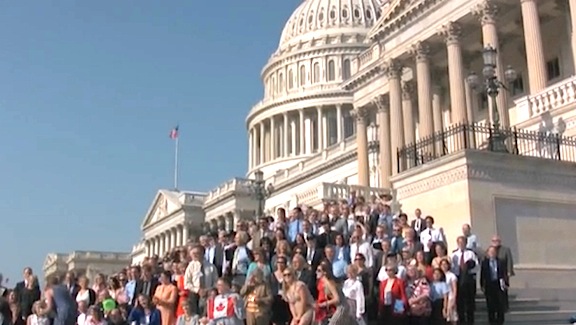 Last month as I was walking down Pennsylvania Avenue past the Canadian Embassy, I encountered some protestors who were carrying signs showing their opposition to Canada’s energy policies. I stopped to chat and told them that I too was a climate activist and that I was actually going to speak with someone at the embassy about climate change that afternoon.

“You’re going in there?” a woman asked, somewhat surprised. “Well… tell them we’re out here.”

This small encounter gave me a peculiar feeling of power. I too had stood outside the same embassy protesting Canada’s tar sands several years before. I’d been arrested in front of the White House during the Keystone XL protests of 2011. Now, I was meeting directly with some of the people responsible for the policies we cared about.

Later that afternoon, I was given a badge and ushered through security along with three Canadians and one of my DC colleagues – all of us volunteers – to meet with one of the embassy’s environment secretaries. Would Canada pass a carbon tax, our preferred policy, anytime soon? Highly unlikely. But Canada is paying close attention to U.S. action on this issue. We informed him that volunteers were storming 439 members of Congress that week, particularly Republicans, to push for a carbon tax. We let him know we were doubling in size every year, and that he’d be hearing from us again soon.

The realization that I could have direct access to members of Congress or embassy staff as a concerned citizen would not have occurred to me before joining Citizens Climate Lobby (CCL) nearly two years ago.

For the past five years, CCL has been giving regular people across North America the tools and confidence they need to become powerful advocates for climate action when speaking with legislators and the media. The organization’s approach is based on a model of engagement originated by the aptly named RESULTS, an organization that successfully raised billions of federal dollars for poverty alleviation in the U.S. and around the world.

For the people who join CCL, this empowering approach is a boon after years of being told that the only way to make a difference is to change light bulbs or sign petitions.

How does it work? Volunteers attend meetings through one of over 100 local chapters across North America and discuss ways to support federal climate action from the ground up. Monthly national conference calls provide experts on climate policy, science and economics and volunteers gradually become well versed in these areas. So far in 2013 alone, volunteers have met with 546 members of Congress or Parliament, and published 112 op-eds and 501 letters to the editor.

Relationship building is central to building a cavalry of Americans willing to fight climate disruption. Volunteers know that one meeting with a member of Congress is unlikely to move any minds, so they come back and keep coming back, year after year. Elli Sparks has been meeting with the staff of Congressman Eric Cantor (R-Va.) for years and relates a face-to-face meeting she had with the House majority leader in June:

“’We need you to promise us that you won’t leave office until Congress has solved the climate crisis.’ He [Cantor] was stunned.  If I were to guess, I would say that he expected us to be angry environmentalists.  He thought we were going to shake our fists at him, read him the riot act, and wish him out of office.  We did not.

Our ask is simple and relentless: we need to tax carbon, and return the revenue to households. It’s an idea that has growing support across the political spectrum. One of CCL’s closest allies, in fact, is a conservative: former Representative Bob Inglis (R-SC) whose Energy and Enterprise Initiative is also pushing for a carbon tax. The growing conservative interest in such a policy has apparently made many Republicans in Congress so nervous that they’ve signed a “no climate tax” pledge to try and scare off momentum.

But climate change won’t wait for political sensibility. Even if Obama, the EPA, and state governments did everything in their power to cut emissions, we’d still need Congress to do something. Pledge or no pledge, CCL volunteers will continue making their way to the Hill and to district offices armed with the unavoidable reality of climate change, open hearts, and deep moral clarity.

“To be complacent about [democracy] functioning or not ensures that it doesn’t,” says Camila Thorndike, one of our volunteers in southern Oregon. “Even if it doesn’t work – which, we can’t stake our work on anyway – I think it’s morally right, it’s emotionally satisfying, it gives meaning to these crazy times in our lives which feel very small.”

The fight against climate change is an epic one. By requiring a commitment that matches the scale of the problem, and by helping people discover the power they have as citizens, we’ll find the energy we need to make change happen.

Erica Flock is the co-leader of the DC Chapter of the Citizens Climate Lobby and recently produced a short film about the organization. She is also online manager at EarthShare.