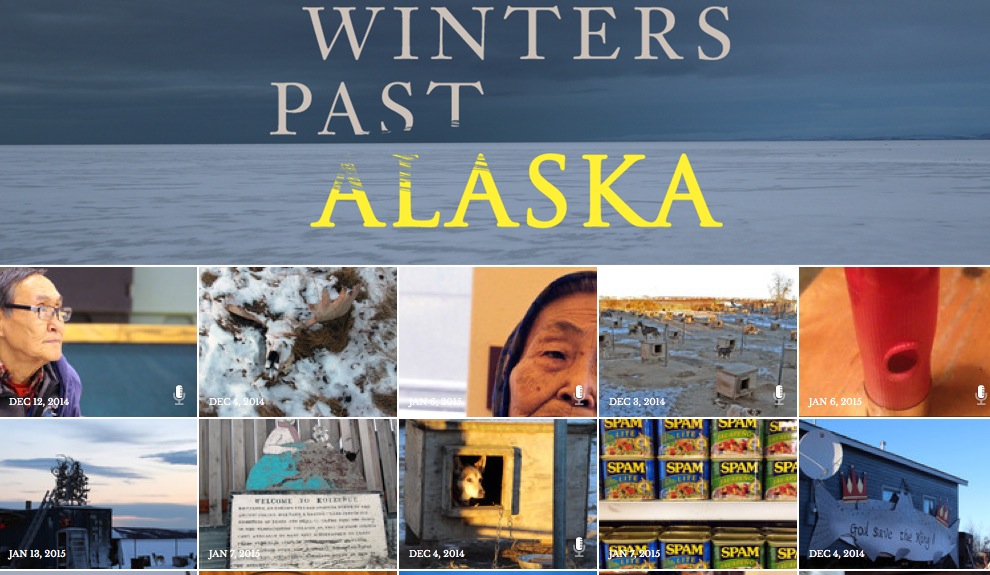 Winters Past is designed to make people really feel that the climate has changed—to understand it in their bodies, physically and immediately. My wife, Josephine Holtzman, and I had the idea for this project during a warm, rainy December in 2012. At the time, I was working as Production Manager at the oral history and radio project StoryCorps, and Josie, who is also a radio producer, was designing and studying “soundwalks,” which are audio pieces meant to be heard in specific locations.

Together, we had the idea to combine storytelling and soundwalks to address climate change. If people took walk outside during a balmy winter, while at the same time listening to stories of snowstorms, frozen rivers, ice skating and sledding, it would create conflict between what they were hearing and what they were experiencing. To us, it seemed like a way to make climate change tangible.

So with funding from Invoking the Pause, which provides small grants for creative collaborations to address climate change, we set out to explore this idea. Through the summer and fall of 2013, we made frequent trips from our home in Brooklyn to upstate New York and the more rural parts of Connecticut. We focused on a band of scrappy people who maintain old ice yachts—sailing craft that once regularly raced up and down the frozen Hudson river, drawing crowds of thousands of people, but that now rarely see ice. We also investigated the ruins (literally) of Connecticut’s largest ice harvesting operation.

From these interviews, along with rich sound design and archival sound, we produced several immersive soundwalks, some meant to be heard in specific places, and others that could be heard anywhere the listener had a little bit of space to walk. The pieces were well recieved, being named as one of the new notable projects by several outlets. We were also covered in Grist magazine and produced a piece for New York City’s flagship public radio station WNYC.

But in 2014, we wanted to do something a little different—specifically, we wanted to travel to Alaska. So, again with the support of Invoking the Pause, we traveled to Bethel, Alaska—a town of about 6,000 people in the southwestern part of the state—and also to Kotzebue, population 1,000, just north of the Arctic Circle. The goal was to listen and to learn, to record the stories of those who live there. We were there for two very busy weeks: we visited a local senior center and interviewed elders there, working with a translator as many preferred to speak in Yupik. We gave a presentation at the local community college. We chartered a bush plane to Akiak, a native village of about 300 people, where Mike Williams, Sr., a village chief, took us up the frozen Kuskokwim river to check his fish traps. We visited a traditional dance practice. We interviewed dog mushers, artists, hunters and cooks, and a man whose butt was literally frozen off by frostbite.

For nearly everyone we talked to, climate change was not a topic for debate, it was accepted as a fact. Some people said that they began noticing change as long ago as 1960. Not everyone agreed on the causes of change, though. While many viewed it as man-made, others thought it had been brought on by people not following the old ways, not minding traditional taboos. We were told that some elders had predicted a period of warmth, after which we would enter “back-to-back winters,” meaning, perhaps, a new ice age. We’ve decided to present the stories we gathered in two ways: Another soundwalk is forthcoming, one that will transport listeners into the Alaskan winters. But we’re also presenting the images, stories and sounds in shorter pieces on the multimedia platform Cowbird. We hope that this will allow more people to hear these stories, and that together they will add up to a powerful portrait of a region and a culture on the forefront of climate change.

Neither Josie and I identify as activists—we see this as a journalistic endeavour, one that seeks to highlight the connection between culture and climate in a way that leads to deep understanding. We have high hopes for Winters Past. We’d love to grow it into a program where we could spend extended periods of time within communities, working with local museums, schools, radio stations and other media and cultural institutions, to preserve the stories of winter before they’re gone forever, but also to help communities to speak about the importance climate, culture, tradition, and place—to share their own stories in their own words.